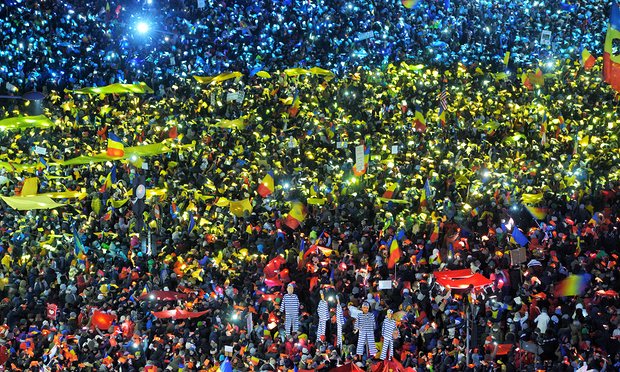 Thousands of protesters in Bucharest on Sunday created a huge flag using coloured paper in blue, yellow and red lit by their mobile phones. Photograph: Hepta/Barcroft

Romania’s parliament has agreed to hold a referendum on fighting official corruption following pressure from public protests.An estimated 70,000 people took to the streets on Sunday for the 13th consecutive night of anti-government demonstrations. Those campaigning have accused the government of attempting to water down anti-corruption laws.

Parliament has already backed down over a planned decree that would have made the crime of abusing power punishable only if the sum exceeded 200,000 lei (£37,600). On Monday, 310 lawmakers voted in favour of the referendum proposed by the president, Klaus Iohannis.

It is not yet clear what question will be presented to voters but the referendum was seen by some as a way to bolster support for the fight against corruption.The recent series of demonstrations are the biggest anti-government protests since the end of communism in 1989. In the last fortnight, protests involving tens of thousands of people have taken place in Bucharest and large cities across the country.

The prime minister, Sorin Grindeanu, withdrew the decree more than a week ago but nightly demonstrations have continued to draw large crowds demanding the resignation of the government, which assumed power last month.On Monday evening, hundreds of people braved subzero temperatures to assemble outside the government offices in Bucharest’s Victory Square, some waving Romanian flags and chanting, “Resignation!” to the beat of drums.

Smaller anti-government demonstrations took place in a dozen cities nationwide. Protesters chanted, “Thieves! Resign!” and used the lights from their phones to project the national colours of blue, yellow and red.Adrian Tofan, a 33-year-old businessman said: “We want to give the government a red card. The justice minister’s resignation isn’t enough after what they tried to do.”

Bogdan Moldovan, a doctor, was also protesting. “We want this government to stand down. We don’t trust it, they want us to go backwards,” he said.Romania joined the European Union in 2007 and Brussels has long taken Bucharest to task over slow progress dealing with corruption and organised crime.The country has intensified the fight against corruption in recent years with the creation of a prosecutor attached to the anti-corruption agency, which has convicted several ministers and senior officials.

The graft watchdog Transparency International ranked Romania below all but three of its fellow EU states in a January report based on public perception of the prevalence of corruption. Worldwide, the country ranked 57th.