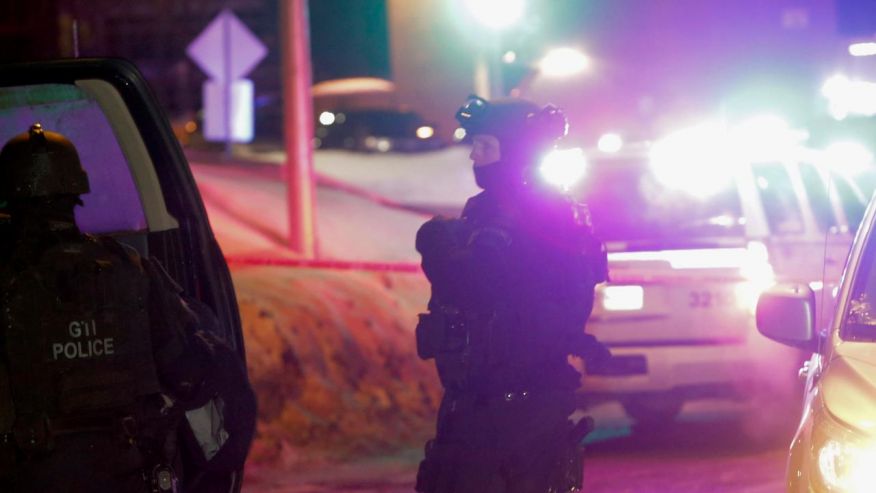 Six people have been killed and eight injured at a mosque in Québec City in a shooting denounced as a “terrorist attack” by Canada’s prime minister. Witnesses said three people carried out the attack at the Québec City Islamic cultural center during evening prayers on Sunday. Police received the first calls just before 8pm (1am GMT). Two arrests have been made, a police spokesman said. Local newspaper Le Soleil said police accepted a third suspect could still be on the run, though spokeswoman Chistine Coulombe later said: “Nothing right now makes us believe that there would be other suspects related to this event.”

One of the suspects was carrying an AK-47 assault rifle and one was aged 27, Le Soleil reported. The Canadian prime minister, Justin Trudeau, spoke of his anger after hearing the news, “We condemn this terrorist attack on Muslims in a centre of worship and refuge,” he said. “While authorities are still investigating and details continue to be confirmed, it is heart-wrenching to see such senseless violence. Diversity is our strength, and religious tolerance is a value that we, as Canadians, hold dear.” Police said the victims were aged between 35 and 70.

At the time of the attack, more than 50 people were thought to be in the two-storey building, also called the Grande Mosquée de Québec, which is equipped with several CCTV cameras. The mosque’s president, Mohamed Yangui – who was not inside the mosque when the shooting occurred – said he got frantic calls from people at evening prayers. He said the injured were taken to different hospitals across Québec City. “Why is this happening here? This is barbaric,” he said. The city’s police said the site had been secured and all occupants evacuated. A large security cordon was set up around the site. Witnesses reported seeing heavily armed police entering the mosque after the shooting.

The premier of Québec, Philippe Couillard, called the killings a “terrorist act” and said the government stood in solidarity with the city’s Muslim population. He tweeted: “#Québec rejects categorically this barbaric violence. All our solidarity to the families of the victims, the injured and their families.” Solidarity rallies will be held across Québec on Monday, Couillard said.