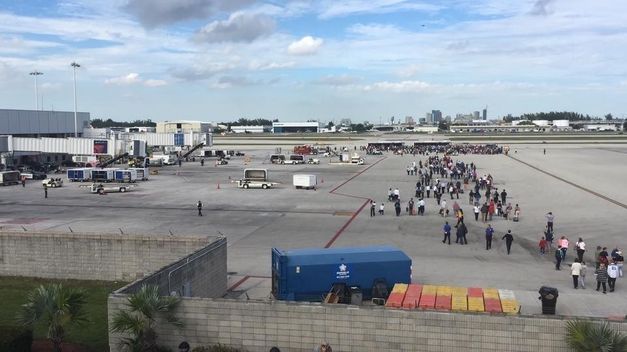 Five people were killed and eight injured in a shooting at Fort Lauderdale airport in Florida on Friday.

Asked at a mid-afternoon news briefing if the shooting was considered a terror attack, Broward County sheriff Scott Israel said: “It’s too early to say either way.” The FBI was assisting the sheriff’s office in its investigation. The sheriff’s office used Twitter to confirm the shooting, which happened shortly before 1pm local time, and say five people were dead, eight had been sent to local hospitals and a suspect was in custody.

The shooter, who was not immediately named officially, was unharmed, Israel said, adding: “No law enforcement fired shots. He is being interviewed by FBI agents and the sheriff’s office.” A Broward County commissioner who had been briefed by the sheriff’s office told the Associated Press the gunman was a passenger who had arrived on a flight from Canada and carried a gun in their checked luggage.

The Canadian embassy in Washington DC, however, said the flight had been from Anchorage, in Alaska and flew to Florida via Minneapolis. The county commissioner, Chip LaMarca, said the shooter removed the weapon, which witnesses told news organisations appeared to be a 9mm handgun, after picking up his luggage. He then loaded it in a bathroom and began shooting, LaMarca said.

Firearms can legally be carried in checked baggage, but they must be unloaded and stored in a locked and hard-walled container, according to TSA rules. Ammunition and firearms must be declared to the airline when checking baggage. Earlier, as the shooting was being investigated, the sheriff’s office said there was an active search for another gunman, after unconfirmed reports of possible additional shots on airport property.

Barbara Sharief, mayor of Broward County, told CNN police had received reports of possible shots in a nearby airport parking garage. People were seen to scatter and running along a runway, carrying baggage. However, at the mid-afternoon press conference, the sheriff dismissed rumors of multiple gunmen. “At this point, there’s no second active shooter,” Israel said. “There’s been no shooting in any place else than in the downstairs of terminal two.”